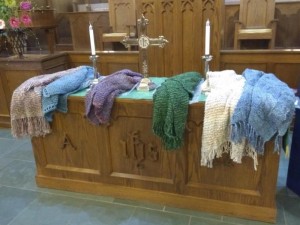 Common Threads Ministry was organized in October 2011.  It was inspired by Cece Wright who, although not knowing how to knit, had joined a group in her church in Santa Fe.  She spoke so glowingly about the experience that Patsy Sharp and Dennie Treat set out to form a group in First Presbyterian Church, Vernon.

The first shawl was sent to Miki Singleton, followed by Madelyn Osborne, Nancy Eiland, and many other precious friends—and friends of friends.  First baby shawls went to Wyatt Brocklehurst and Reece Fisher.  Through the years, follow-up cards decorated with “needles and yarn” have been sent to persons who had received shawls but to whom we wanted to offer encouragement.

In January, 2013, a one-year anniversary party was hosted by Dennie Treat at the manse.  At that time, over 21 knitters and crocheters had given 34 prayer shawls and baby blankets.  Over 250 dishrags and bottle koozies had been given to VISD staff as tokens of appreciation.  In October, 2014, an observance of the completion of 100 shawls was held at the home of Patsy Sharp for a celebration lunch of Fiesta Stack-ups.

The group has also made 15 shawls to place on the pews in the sanctuary for those sensitive to cold drafts.  The idea for the “Warm and Fuzzy Tree” adorned by mittens, scarves, etc. and placed in the Narthex in December was born in the Common Threads Ministry.  The congregation has generously contributed to this tree for those in need in the cold months.

On October 21, 2018 the group was recognized for having given away their 200th prayer shawl on October 11th. The group members at this time are Betty Allison, Pam Johansen, Lori Meurs, Evelyn Morrissey, Deanna Rainwater, Joyce Records, and Patsy Sharp.  New members, skilled or unskilled are welcome!